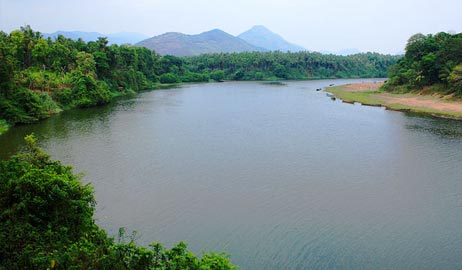 The rivers of Kerala

There are broadly 44 rivers and streams in Kerala. Though tinier in dimension, compared to the major rivers of the country, they drain a surprisingly large quantity of water and sediments into the Arabian Sea. This is due to the heavy rainfall and the terrain of Kerala, which slants from the Western Ghats to the plains to finally merge with the Arabian Sea. A distinct characteristic of the rivers in Kerala is that they flow in an almost straight course, further facilitating drainage.

41 of the 44 rivers in Kerala are west flowing, and originate mainly from the Western Ghats. They fuse with the Arabian Sea either directly, or through the medium of the backwaters. Some smaller rivers, like the Kumbala, and Bekal, have separate watersheds, and drain into the sea through the channel of the backwaters.

One of the important rivers in Kerala is the Periyar – the longest and the largest river in the state. The river is 244km long, and covers a drainage area of 5,398sq. km. Formed at a height of 1,853m, where a number of rivulets merge together in the Sivagiri Hills, the Periyar flows towards the north and later turns to the northwest, to finally lose itself in the backwaters at Munambam in Ernakulam District.